A difficult day for walking – rainy and lots of hills – but apparently we traveled 27 km and ended up in Lorca. The sun appeared and a row of cold, damp pilgrims lined the road on the sunny side of the street, across from the albergue where we had found a room. It was in fact, despite this introduction, a wonderful day. Mountains in the mist, fast-running rivers, masses of wildflowers (notably, fields of poppies), birds and frogs, medieval villages and bridges. 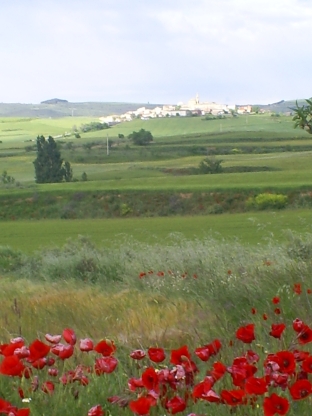 We had company early in the day with three Brits from Hereford, and then company again late in the day when we joined a sweet couple from the Netherlands.  And we met a man named Stefan from Germany, who had recently spent three years in Washington D.C. and now lives in Sweden.

We’re at the Albergue de Peregrino in Lorca. Mozart is blaring as we come in and an earnest young man seems to be in charge. I can’t help but wonder about his story. I did ask if he was a musician, but he says no.  I am guessing that “Mozart’s Requiem” and “blaring” have not been used in the same sentence before.  At least I hope not.

One more answer to the “why” of this trip…to see if I can. These two days have been difficult. No blisters yet, but sore shoulders and feet. Unhappy muscles and ligaments. I want the answer to be a resounding “yes, I can” though.  And I hope I can in 10 years and 20 years. We have certainly seen people in their 70’s on the camino.

Dessert was a choice of an apple or an orange. The sticker on the apple announced it is of the “Mozart” variety. Of course.

The albergue in Lorca was small and provided just the right atmosphere for conversation with strangers. The Stefan we met had decided only two weeks earlier to come to Spain and walk the camino. He has no time limit and a supportive family at home and we learn that only four months before he had been in a wheelchair after having had a stroke at age 49. He walks slowly now, with a limp and wonders what he will learn about himself by the time he reaches Santiago. A doctor from France joined our conversation, only revealing his profession upon learning about Stefan’s stroke, quickly making a few assessments and giving him encouraging advice. The doctor himself said he was walking because, at age 50, he knew it was time to shed some things.  He didn’t say what those things were.

Our new friend Stefan had clearly been a very successful executive in the car industry and had lived all over the world, a man of means and accomplishment in his field. His physical limitations, however, suddenly took a backseat to the ending twist in his story. He quietly tells us that he lost his job after his stroke and is now unable to find a new position. He didn’t present himself as someone defined by his job, but the pain was clear.