In the night I realized our host reminded me of “Doc” in the Back to the Future movies. He awoke us at 6:00 am or so, and had “breakfast” on the table for the pilgrims at 6:30. HUGE cups of cafe con leche, at least three times the size of a normal coffee mug. The cups were from a matching set of mugs with Disney, Looney Tunes, and Warner Brothers characters on them.  You cannot make this stuff up.  (As a friend commented after last week’s post, thank goodness I wasn’t imagining us in a Tarantino film).

We walked seven and a half hours today, nearly 30 km to Belgado. Today’s walking was difficult…but not worse than childbirth! Warmer temperatures helped. We walked that distance, however, on very little food. Spanish breakfasts of coffee and toast are not enough to walk seven hours on. We wanted to stop on the way for fruit and a sandwich, but somehow never managed to be in any of the small, blink-and-you-miss them towns during the 45 minutes a day that stores seemed to ever be open. There was no food to be found, and a Cliff Bar discovered in the bottom of my backpack around 2:00 pm was the most delectable treat imaginable, divided between us and savored .

We decided to shuffle our weary bodies past the first albergue in town, since it looked like something from Gatlinburg, Tennessee with hillbilly peregrine cut-outs pointing to the entrance (have I mentioned that you cannot make this stuff up?).  Too cheesy even for our bone-tiredness. We got into the town proper and saw another albergue next to a church, but an elderly Korean couple outside didn’t give it a ringing endorsement, so we dragged ourselves another block further and discovered an albergue run by the couple from Fawlty Towers, known here as Albergue Caminante – Basil obsequiously showing us to our (private!) room, and his wife Sibyl at the desk in a mail-order medieval dress. I know it was mail-order because I have one very similar. Neither speaks English, but they are funny and charming and I’m so glad we found our way here.

The pilgrims’ dinner was cooked for us by a Romanian woman and served by our hosts. Paella, meat, and vegetables. And lots of wine of course. We shared a table with a couple from Innsbruck who set out last year to walk from Austria to Santiago, but didn’t make it and so are finishing the trip this year, a woman from Romania who works at her country’s embassy in Holland, and a man from Ireland who looked like a jockey. A silent group, which forced me into the role of social butterfly. I don’t love it, but I’m not bad at it either. In retrospect, though, maybe everyone was just tired and enjoying their food and silently hoped I would be quiet! 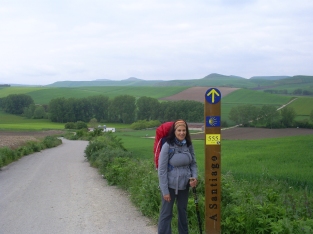 Every sort and condition is found on the camino. From baby Olivia to young school children on holiday with their parents, hippie wannabes in their 20’s, and couples of every age. Some met while walking the camino, some have walked from their homes in France or Holland or Germany, some have grown old together and walk in a way that suggest they truly are two parts of a whole. People of many nationalities, but not many colors. People of all shapes and sizes too, from the long S-shaped bodies of the bicyclists, to paunchy and frumpy middle-agers, to wiry old-timers. Many would surprise you as potential pilgrims, and those hobbling on sore feet aren’t always the ones you might expect.