The albergue in San Juan de Ortegais is an old monastery, and at 5 euros the cheapest place we have stayed. Everyone was kicked out at 8:00 am and we began the trek to Burgos. Cloudy and cold yet again, we went through some really desolate forest, encountered a young man begging for bread money, stopped at the most charming little store for breakfast in Ages, were accosted by a Gypsy, insisting we sign her petition and give her money for a center for the deaf. We resisted.  Eventually we reached the ugly, industrial, and interminable outskirts of Burgos by 1:00 pm. We had decided to take a popular alternative of riding a bus from Burgos to Leon, and with a little help found our way to the bus station and bought tickets for the 5:20 bus. 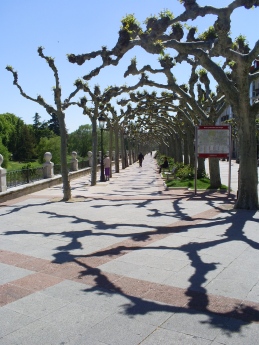 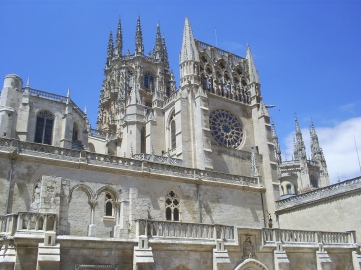 With a few hours to spare we sat outside and enjoyed the sun that had appeared in Burgos (and not before!), eating lunch on a lovely promenade near the main archway into the plaza. Afterwards we took refuge from the wind in the Cathedral, only to discover that it was much colder inside than out. But we had bought our peregrino tickets at 3.50 euros and took our shivering selves through one of the most spectacular cathedrals I have ever seen. Its colorful and overly emotional piety is not for me, but architecturally it is truly stunning and a Gothic masterpiece.

The bus to Leon was easy and comfortable and saved us days of travel through a desert that some pilgrims love, but many more avoid. A Canadian we had met earlier was also on the bus and knew his way from the station to Leon’s Cathedral plaza where we have enjoyed a Spanish evening of people watching and a late dinner outside. Finally, at 10:30 pm it is dark.

The next day was unfortunate. The walk out of Leon was more than an hour through dusty, car-filled narrow streets. The city seemed to go on and on, and the early moments of medieval interest soon turned into grimy streets and shuttered shop after shop. But the unfortunate part lay ahead – we found ourselves on the original camino route, having missed a turn-off for the suggested alternative route. The first stayed along a major two-lane highway, the second went through several small, welcoming villages (so the book said).  The first kept us in the sun all day, the second surely offered some shade. This day turned out to be the hottest so far, naturally. By the time we realized our mistake it was too late. We had stopped at a forsaken truck stop and finally looked at the maps. What to do except make the day entirely miserable and walk 32 km to Hospital de Orbiga, where the two paths met up again.

A few things saved the day, however: 1. a couple of challenging games of Botticelli  2. my son’s good humor  3. seeing several “neighborhoods” of underground houses, some still inhabited. They are built into the sides of hills, with doorways cut into the hillsides, and little chimneys sticking out. An early attempt at eco-friendly housing? A hippie commune? An experiment of some kind?  4. coming to Hospital de Orbiga on a long road through farmland, getting caught behind, and then among, a flock of sheep being herded from one field to another by two sheepdogs and a farmer 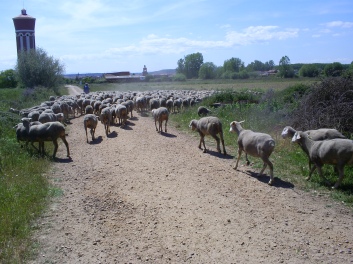 5. crossing the very long and quite beautiful bridge – new, but medieval in appearance – that Hospital is famous for  6. stopping at the very first albergue across the bridge and finding it very clean and rather inexpensive. Misfortune redeemed.